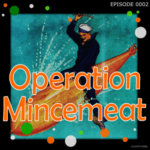 Today’s episode transports us back to World War 2 with Operation Mincemeat.

According to the real-life story of Operation Mincemeat, the British intelligence agency concocted a plan in 1942 to 1943 to deceive Nazi Germany into thinking that the allies were preparing to invade Greece rather than Sicily, as they had originally intended. They did this, by placing false paperwork on the body of Glyndwr Michael, a destitute man who had committed suicide. They disguised him as Captain William Martin, a made-up Royal Marines officer. In an effort to convince the Spanish and Germans that Glyndwr Michael perished in an air-plane accident, they put Glyndwr Michael’s dead body, which they passed off as Martin, into the water so that the current would force it to wash up on the Spanish coast.

The British had faith that Spain, which was philosophically aligned with the Axis Powers and owed money to Germany, would give the Germans the fake intelligence. The prevalence of Nazi spies in Spain also increased the likelihood that the forged documents would end up in German hands.

Shortly after the body was found, British authorities started seeking its return in exchange for the information it contained. The Spanish government returned the opened envelopes and the body of “Major William Martin” after the Germans deftly (or so they believed) resealed them. Hitler received the information that the Germans had acquired. He promptly gave the order to transfer significant military assets out of Sicily and relocated them to Greece. Officially, “the man who never was”, accomplished his mission. Although Major William Martin didn’t actually exist, the Germans thought he did.

So, think about this: If you are forging identity documents, you commit a crime. But in times of war creating false paperwork helped allied forces conquer Sicily.

Finally, if you like to revive the plot, I recommend watching the movie Operation Mincemeat that was released back in April 2022.